What a whirlwind spring! I’ve been away (says Captain Obvious), because Murphy’s Law struck again, and when I put more things on my plate, someone came along to heap more on top.

I’m not gonna be able to eat all that! I think I just need to lay down.

See? My life has spun so much that I’m mixing my metaphors. *DEEP BREATH*

What I’ve been up to…

I’ve done some local author appearances complete with reading excerpts in my attempt at the Irish brogue. I’ve played harp when I can at a weekly Open Mic.

And, of course, I’m writing. I’ve gotten down the first twenty-three pages of my next book…because the story wouldn’t stop traipsing through my thoughts. This is my first book that’s not Young Adult. It’s a Historical Fiction centered on the lifting of Prohibition in America. Most importantly, it’s inspired by the true story of my great-grandpa who owned a restaurant/bar during the Great Depression. He doted on my Grannie, who was 10-years-old at the time. The trouble was, great-grandma was a bad alcoholic.

And so the story goes…

First and foremost, I’m a mom. Sometimes, my writer/musician life gets in the way.

Charlie graduated from VPK and “Exceeded Expectations” in everything scholastic despite having brain surgery halfway through the year. *fist bump* 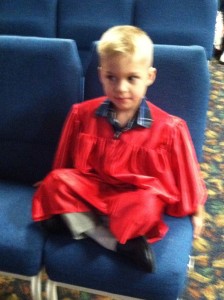 William started our annual birthday sprint (three birthdays within ten days). I’ve learned a valuable lesson about birthday invitations this year. When sending them to kids whose parents aren’t in my phone’s contact list (which was most), don’t assume that most of them know what Emily Post teaches about “RSVP.”

Cue frantic indecision about how much pizza and cake to order.

And as if there wasn’t enough stress in THAT weekend…

The evening before William’s birthday party, Charlie decided to perform some kind of daredevil stunt. Ya take your eyes off them for a second! We were in the gymnastics room at the YMCA and he tripped. Yep. That’s it. However he did it, he managed to brake the end of one of his metatarsals near his toes.

If you don’t know what a metatarsal is, then clearly you haven’t read The Stone of Kings. <=== *that’s a hyperlink right there (hint hint)* 😉 Who knew I’d use the information for my own kid?

Then hubby had to promptly leave for a few days on an out of town business trip. No wonder I managed to pick up some kind of stomach bug the last couple of days.

What? You’re exhausted? Why? 😉

At least this month wasn’t nearly as bad as when Charlie had his neurosurgery.

Now that Charlie is casted and can join day camp with his brother, I will hopefully be able to crank out my new book.

In the meantime, unless the earth swallows me up, I hope to resume blogging. But it won’t take away too much from my novel-writing effort since I’m starting a series called “Grannie’s Memories.” I’ll post the anecdotes and interesting bits Grannie wrote down. These are things she remembered about being a kid during the Great Depression. I’ve been reading them over and over for background for my book. You might like them. Grannie was quite a character. 😀

Till then, would anyone like some leftover birthday cake? …please?

Do you mix metaphors when you get over-stressed? Are you looking forward to a bright spot of peace that’s almost within your grasp? Do you know what a metatarsal is because you’ve read TSoK?

In light of the upcoming Memorial Day holiday, I’m very happy to have Jeff Salter on my blog today! I read (and loved) his book, The Overnighter’s Secrets. Once I catch my breath, I’m very anxious to read Called to Arms Again. Take it away, Jeff!

Tribute to the Greatest Generation
By Jeff Salter
Very much appreciate Shea’s gracious invitation to appear here today. Talented author, Shea Ford, is a friend and colleague at Astraea Press.
I think it’s especially fitting that this column appears in the days leading up to our annual observance of Memorial Day. As my family does, Shea’s family includes a lot of military veterans.
Important and timely
Have you ever read a novel which seemed so important and timely that you could hardly contain your enthusiasm about it? Have you ever WRITTEN such a story?
Well I have. At least it seems that important and timely to me. No, not FOR me — because this novel is my tribute to the Greatest Generation … and those still living are leaving us all too quickly. I’m a “baby boomer” — my parents, aunts, uncles, and teachers (and practically every adult I knew) were among that generation which struggled through the Great Depression and sacrificed during World War II.
About the story
Called to Arms Again was released a year ago in May from Astraea Press. Of the nine novels I’ve completed so far, this was my third written and my third fiction book published.
It’s the story of a young newspaper reporter looking for a new angle for her Veterans Day special section. Who better to give her a fresh perspective than a bunch of old war dogs who’d been there and back. Not only does Kelly Randall learn what the Greatest Generation was made of, but she soon discovers a great deal about her own mettle.
My story has action, comedy, romance, plenty of the ‘can-do’ spirit, and an unashamedly healthy dose of patriotism. You’ll laugh, you’ll cry, and you’ll cheer.
I need your help
I haven’t gone ‘all-out’ with promotion of my other novels – romantic comedy, screwball comedy, and romantic suspense – because they’re mostly enjoyed by readers of those genres. But the sky’s the limit on promoting C2AA — this story appeals to readers of both genders … from ages 19 to 90!
If you were born before about 1930, you ARE part of the Greatest Generation and you’ll find yourself (and your siblings and friends) in my story!
If you’re a Boomer (born after WW2) — your parents, aunts, uncles, and teachers were members of the greatest generation. Buy this book and read it, because you’ll recognize these characters. And if you have living parents or other relatives, tell them about my story. Please remember, the WW2 generation – both those who served in the military and those who sacrificed on the homefront – are dying at a rate of about 2000 per day … so there is an urgency to let them know about this story which honors them!
If you’re the child of a Boomer Generation parent, you need to read this so you’ll understand what your grand-parents (and their siblings) went through and how they prevailed.
Read it! Pass the word! Get this story into the hands of everyone who loves Freedom!
Don’t you agree that artist Elaina Lee did an outstanding job on my cover for Called to Arms Again?
——
Called to Arms Again
By J. L. Salter
Hook & Blurb:
Grit doesn’t fade away … it just becomes crusty. With harrowing elements right out of today’s headlines, this story reaches back into the sturdy heartbeat of people raised during the Depression and tested during World War II. Though the old uniforms haven’t fit in many decades, their resilient spirits still have that same intensity which helped save democracy.
Needing only a fresh angle to write her Veteran’s Day special, Kelly discovers first-hand that the Greatest Generation still has enough grit to fight back. While all the authorities are occupied during a massive Homeland Security drill, an urban gang of thieves targets an isolated retirement subdivision … figuring the crippled geriatrics would offer no resistance.
Though Kelly’s widowed boyfriend came along only for a post-funeral luncheon, Mitch soon finds himself leading a mis-matched flanking team. Kelly’s good friend Wade has his own assignment, with a home-made mortar and lots of illegal gunpowder.
Maybe it’s difficult to remember everyday things like taking pills, but these octogenarians have never forgotten it was up to them to defend family, home, community, and country. The outcome of their courageous stand depends on the resolve and resourcefulness of an unlikely ensemble of eccentric elderly neighbors, several American Legion members, and others spanning four generations.
——
Buy Links:
Amazon:
http://www.amazon.com/Called-to-Arms-Again-ebook/dp/B00D3D3O8G/ref=sr_1_1?s=digital-text&ie=UTF8&qid=1370649179&sr=1-1
Barnes & Noble:
http://www.barnesandnoble.com/w/called-to-arms-again-jl-salter/1115454541?ean=2940016705842
With Dingbat Publishing“Scratching the Seven-Month Itch” (screwball comedy) — date to be announced“Curing the Uncommon Man-Cold”  (screwball comedy) — Dec. 2013
Published by Astraea Press
“The Ghostess and MISTER Muir” — date to be announced“Hid Wounded Reb” — date to be announced
“Don’t Bet On It” ( a short novella) —  April 2014“Echo Taps” (a short companion piece for “Called to Arms Again”) — June 2013
“Called To Arms Again”  (a tribute to the Greatest Generation) – May 2013
“Rescued By That New Guy in Town” (comedic romance) – Oct. 2012
“The Overnighter’s Secrets” (romantic suspense) – May 2012