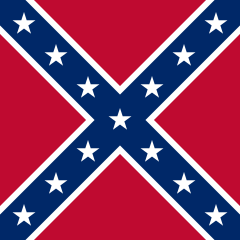 All week, I’ve heard people argue history. “The Confederate flag is not a symbol of racism and hate.” They go in circles about the flag’s true meaning. I’ve heard all those arguments before last week’s shooting. Others say “This is not the time to debate the Battle flag.”

However, none of those people seem to have used the power of empathy. Maybe I can help them. After all, I’m a writer. This is what I do. I’ve never been to the State House in Charleston, SC. But this is how I’ve felt this week.

I stand in the sun at the State House of South Carolina. Drops of sweat slide down the side of my head. I wipe them away with the sleeve of my shirt. Tears remain on my cheeks for the nine slain. Dylann Roof wasn’t a lone wolf in his ideals. He may as well have been one of my students who exhibited similar notions in the superiority of their own race. My race. Ugh. It hurts to think about it.

What could I have said or done to have gotten through to them?

There is a Civil War monument on the north side of the grounds. Such a dark time in our history. Our history. We still argue over why it was fought. I suppose, in a way, it rages on. Some people like to pick and choose which parts of history they’ll affirm actually happened. Kind of like picking and choosing Bible verses to live by. Forget the rest because secretly, it makes us uncomfortable.

An occasional wind passes and the Confederate Battle flag flaps above the monument. I saw that flag all too often as a teacher. The racist students wore them all the time. It bothered me. It was jarring at first, but I got use to it. It was their right. I wouldn’t want someone telling me that I shouldn’t wear something with an Irish flag on it.

But Dylann Roof didn’t show off the Irish flag. He showed the Battle flag. He also showed flags of Rhodesia and apartheid-era South Africa. But it’s the Battle flag that flaps above my head.

Why isn’t it at least at half-staff? Oh, there’s no pulley. Can’t they at least take it down temporarily? It looks arrogant. The US and State flags are at half-staff. But the Battle flag could care less that nine people lost their lives.

If it would come down just for the mourning process, then I could give some credit to the people who keep shouting that the Battle flag is not a symbol of racism and hatred.

The same flag that the killer proudly waved, flies high while the rest of us grieve.

Yes, I understand that the law keeps the flag up there. That particular law has as much empathy as the flag.

We are humans. We identify with symbols and have done so for centuries. If the Battle flag had come down out of respect for the nine slain, it might have taken on a new meaning. A meaning that would negate the images of Roof and his ideas of white supremacy.

Whatever it’s history, whether Civil War or Civil Rights, we had a chance to CHANGE the meaning the Battle flag holds for many Americans. It was time! Not two years from that day! If you believe that the flag isn’t a symbol of racism and bigotry, then prove it isn’t. You had a chance  – but you didn’t take it. That might make you uncomfortable, but I value the lives of our multi-ethnic country more than your comfort. Perhaps if you had been more empathetic, there wouldn’t be such a call to have it removed from government property.