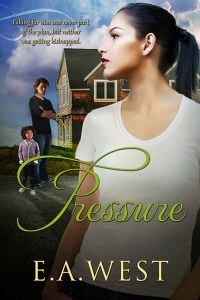 I’m happy to have back E.A. West! She was a guest last year with her book, Battlefield of the Heart. I have high respect for our military and so I’m thrilled to be able to bring you an excerpt of West’s new book, Pressure. Enjoy!

Ravi Singh is a homeless veteran haunted by memories of his time in the Marine Corps. Thanks to his attempts to get a group of teenaged gang members to leave the life of crime they’ve chosen, he got shot. Now the wound is infected, and he’s too sick to move. When the teens bring his favorite nurse practitioner to him, he’s torn between anger that they kidnapped her and gratitude that they cared enough to get him help.

As Emma Johnston works to treat Ravi, searches for a way to escape, and attempts to figure out just what his relationship to the gang is, she meets the young orphan boy dubbed Twitch. The child brings out the best in Ravi and helps Emma see a side of the gang members she never expected. The more she learns about Ravi’s unconventional life, the better she understands him and the more she wishes he would quit stubbornly refusing to seek psychiatric treatment. Falling for him was never part of the plan, but neither was getting kidnapped.

Can their budding relationship survive such challenging circumstances, or will it end in devastation?

Emma Johnston’s footsteps echoed through the dark parking garage as she hurried toward her car. The hair on the back of her neck rose with the sensation of someone watching her, but the garage appeared as empty as ever. Why hadn’t she asked security to escort her to her car? Waiting an extra twenty minutes for a guard to show up when she was already exhausted would have been better than compromising her safety by venturing so far from people in the middle of the night.

She formed a fist around her keys, making sure the points stuck out between her fingers. It wouldn’t do much damage to an attacker, but it would likely cause enough pain to let her get away. Drawing in a deep breath, she tried to convince herself she was just paranoid due to exhaustion. The unsettled spring weather had everyone jumpy, which was why she had finished her shift in the Green Team clinic and been called to help out in the emergency room. The number of accident victims, fight participants, and psych patients had been overwhelming, causing the VA hospital emergency room to call in assistance from other departments. Because Emma had begun her career with the hospital working long hours in the ER, she’d been near the top of their list. That experience plus her skills as a nurse practitioner made her able to do whatever they needed.

Spotting her car ahead, she breathed a sigh of relief. In less than two minutes, she would be safely inside and on her way home for a well-deserved rest. The scuff of a shoe on the pavement to her left made her jump and tighten her grasp on the keys. Whirling toward the sound, she spotted two older teenage boys in baggy clothes standing much closer than she liked.

“Ye-es?” How did they know her name? She knew all of her patients and some of the family members by sight, but there wasn’t even a faint glimmer of recognition with these two.

The two teens stepped closer. “You gotta come with us.”

“I don’t think so.” She backed away, prepared to run screaming until they disappeared back into the shadows. Of all the days to forget to charge her cell phone…

They both pulled out black handguns and aimed them at her. At first, her mind refused to accept what she was seeing, but then it sank in that the weapons were nearly identical to what the police carried. Her heart leapt into her throat as the two teens advanced.

“You’re coming with us.” The boys flanked her, and the only one to speak so far took hold of her arm as the other one pried the keys from her fingers and took her purse. “We heard you straight, and the old man needs a doctor.”

Someone was ill or injured? “I’m not a doctor.”

“We heard you close enough.” 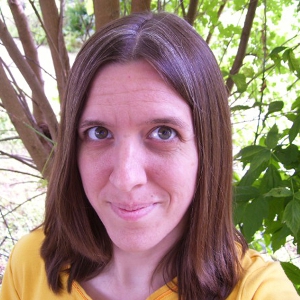 E.A. West, award-winning author of sweet and inspirational romance, is a lifelong lover of books and storytelling. In high school, she picked up her pen in a creative writing class and hasn’t laid it down yet. When she isn’t writing, she enjoys reading, knitting, and crocheting. She lives in Indiana with her family and a small zoo of pets.