The nubs of my blunted fingers rub my shirt. Seems I do this more often without thinking. I can’t tell if it’s from the crazy itching where the fingers use to be, or if from trying to soothe my rumbling belly.

Hunger has kept me from bothering to look for work anymore. I’m too hungry to work. When my fingers parted ways with my hand, they took my chances of paid work with them anyway. Like a weary wife who takes away the children and all hope of a future. Why hire a man with six fingers, when there are plenty with ten? Ten fingers get the job done better. Seems awfully nit-picky to me. But I suppose bosses can afford to be picky in times like these.

I’ve learned to be careful where I loiter. An empty storefront is best. Plenty of those around. No one complains so long as I don’t block any signs. I don’t see how it matters. Most of the signs entice folks to buy nonexistent food. The ghost of food lingers on empty counters in empty diners. I have a wild desire to fill my empty belly with it. But that’s just my imaginative youth trying to take over. I don’t blame my youth. Someone’s got to provide.

My buddy Jeb thinks I should keep my hands out of my bibs. Show everyone my mangled hand. I’d get more coins tossed my way. “Sympathy money” he calls it. But every man has some shred of dignity that he won’t let go of. It’s bad enough to stand here waiting for a coin to fall on the walk. I won’t even put my hat down in a silent plea for change. Besides, if a boss happened to be walking by, I would want him to think he’s seeing a whole man in case he needs a worker. Begging is beneath me. 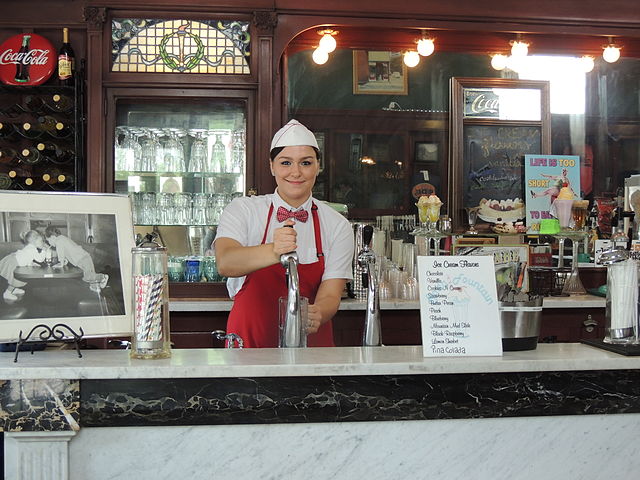 Here’s the next chapter in my “Grannie’s Memories” series. She wrote them down circa 1967* and these stories are what is inspiring my Work In Progress. She was born in 1923 and grew up in her father’s restaurant in Marietta, Ohio.

On mornings, I’d make my “rounds” which I called “help opening stores.” If any of those people ever felt I was “in the way” so to speak, I can never remember them telling me it was time to go home. Only once upstairs in Grubers Department Store I recall a nice lady who worked there telling me to be real careful. I was checking all the room size rugs which hung on the wall, a great fascination for someone my age.

Now, I’ve covered one side of the street up to the alley, but as the old saying goes “the grass is always greener” you know the rest I’m sure. On the other side starting at Green Street, I remember Glines Cleaners. Then the Dime Savings Bank and next to it Richards Drug Store.

Mr. Ed Richards owned it and he had a big soda fountain in there. One of my favorite fountain drinks was Cherry Smash. I used to call it “made by hand” because it came in a glass with ice instead of a bottle. My next favorite fountain drink was root beer. And for two or three years he gave me a “Free Root Beer.” Just one, mind you, and always in the springtime.

Getting back to the root beer.

One spring day, a year or two later, Mr. Richards hired a new boy behind the soda counter. They called them “soda jerks” back then, I guess. Anyhow, Mr. Richards told him to fix my “free root beer.” The glass was a lot bigger than usual and he smiled when I thanked him. I put a straw in the glass and took a big gulp. What happened next I’ll never forget because the taste in my mouth was not root beer!

Anyone my age who has had to take CASTOR OIL will know immediately what I’m talking about. Castor oil has a flavor all it’s own and once you taste it you will never forget it or never want to taste it again.

This story goes like this. Every spring, my mother went over and paid Mr. Richards for my “root beer.” Back then, castor oil was to rid your system of any germs you might have picked up during the winter. What finally caused this plan to fall through was because Mr. Richards forgot to tell the new soda jerk to mix it up. All the oil was in the bottom of the glass where I put the straw and the root beer was on top.

I don’t think I care to talk about this any longer. My mother was one smart lady, but today I still don’t like root beer.

*I’ve done some minor editing for the purposes of this blog, mostly sentence and paragraph structure and some word choice.

Have you ever ate or drank something and got a surprise? Are you completely turned off a food because of a bad experience? Have you ever had to take castor oil?

As promised, today’s post starts my “Grannie’s Memories” series. She wrote them down circa 1967* and these stories are what is inspiring my Work In Progress. She was born in 1923 and grew up in her father’s restaurant in Marietta, Ohio.

She doesn’t always tell how old she was in some of these stories. I imagine for this one, she was probably around 7 or 8 years old. One thing you need to know: her “rounds” is her going around to all the other businesses on her street to “help” them open for the day. 🙂

This is a map of where she’s talking about in this story and what it looks like today. I circled the area “in question.” 😉

One summer day, I was all alone and no one to play with. I walked out the back door of our restaurant. The street in back of us was called Post Street. The big building there was called the St. Charles Hotel.  Miss Chrissie McCurdy – I think she was relation to our dentist – ran the hotel. I loved going into the lobby and looking at all the old-time things there.

Over at the desk along the wall was a container that had kitchen matches in it. I wasn’t allowed to play with matches, but that container fascinated me. I had watched an old gentleman go over and take one match out, strike it, and light his pipe. Miss Chrissie was always somewhere around, sometimes behind the desk or out in the dining room. I treasure now the pictures I have of me at that were taken with Miss Chrissie. Such a gentle lady.

Across the street from the St. Charles Hotel was the bank of the Ohio River. About a block down was the mouth of the Muskingum River where it joined the Ohio. On that point was a big building we called the Government Works. In the summertime, a man from there would mow the grass on the bank. A few days later, after the grass had dried, he would burn it off. I also remember in March or April, we would pick violets by the handfuls on that bank. We never had to go to the store and buy beautiful violets because they grew wild.

One particular summer day, after making all my “rounds,” I walked down to the St. Charles Hotel. No one was in the lobby. It was dinnertime, and they were all in the dining room or the kitchen. I walked on over to the river bank. The grass had been cut a couple of weeks before and it was still lying on the ground.

That morning, I had tried to come up with something I could do to help someone that day. Now, I was looking at the answer! I would burn the grass for that man and he wouldn’t have to do it!

I ran back over to the hotel lobby and no one was there. So I borrowed a couple of matches from the container on the wall and went back over to the river bank. I found a flat stone and struck one of the matches, but the wind blew it out! I struck the other match with my back to the wind like I saw a man do on the street one day to light his pipe.

In just a few minutes, the whole river bank burned out of control.

I don’t know who called the fire department. It could have been someone looking out a window of the hotel. I never saw so many people and fire engines in my life! I don’t remember if I ran home or if someone took me, but Dad met me at the door and that’s the first and only time he ever spanked me.

Thinking about it now, the whole block of Front Street could have gone up in smoke.  I’ll never know if Dad had to pay any damages or not. What I didn’t realize was only the dry grass on top burnt. Under that was wet. It had rained a few days after the man had cut it and that’s why he hadn’t burnt it yet.

I can think back then and know the Lord saved a great disaster by making it rain.

*I’ve done some minor editing for the purposes of this blog, mostly sentence and paragraph structure and some word choice. I probably should have taken out more exclamation points, but it makes me think of how animated she use to get telling the story. 🙂 But I added the headings.

Have your grandparents ever admitted to causing such chaos? Have you? Have you ever “helped” too much?